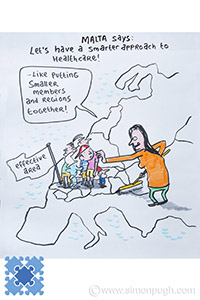 As we stand, today, post-Brexit vote and with Donald J. Trump newly ensconced in The White House, the divisions in key parts of the Western world are clear and stark.

Across the United States, women (and men) marched in protest after the inauguration of the 45th president, in scenes unheard of for such an event.

Arguments are already raging about media representation of the crowd during Trump’s speech - demonstrably many fewer people turned out than at the Obama ceremony of 2009 (and 2013), yet The Donald and his team are in denial.

Trump’s press secretary, Sean Spicer, used his first White House briefing to journalists in the West Wing to say: “This was the largest audience to ever witness an inauguration. Period. Both in per-son and around the globe. These attempts to lessen the enthusiasm of the inauguration are shameful and wrong.”

A clearly angry Spicer added: “We’re going to hold the press accountable,” before stomping off stage and refusing to answer questions. The latter is a key part of his job.

So it is clear that President Trump has already stepped up his battle with the press. But when it comes to ‘fake news’, ‘alternative facts’, and some downright lies, it’s all there to be seen already.

Across ‘The Pond’, no major marching and on-the-streets protesting has accompanied the Brexit process so far, probably because there hasn’t really been a process up to now - although there have been battles in the courtrooms, of course.

And lest we forget, Brexit came with its own ‘alternative facts’, not least the famous one in respect of handing £350 million per week back to the beleaguered National Health Service. A huge lie that undeniably helped to swing the vote.

UK Prime Minister Theresa May, in her recent speech, said that Britain will leave the EU’s single market in a so-called hard Brexit. May even said that this was what ‘Leave’ had voted for. Really? Was that on the ballot sheet? No, it wasn’t. ‘Alternative fact’? You decide…

Regardless, there are now deep divisions within the United Kingdom over what Brexit means and what the consequences will be. Politics aside, such divisions can only harm societies on both sides of the Atlantic, and it is hard to see where things will go with Trump using ‘divide and rule’ tactics via comments about Muslims and Hispanics, plus his threat to build a physical wall between Ame-rica and Mexico.

A flashback to 1968 and Enoch Powell’s ‘Rivers of Blood’ speech shows that very little has chan-ged when it comes to blaming problems on immigrants even down half-a-century.

Long before the 1992 Maastricht Treaty heralded the era of free movement of people in the EU, Powell’s speech criticised Commonwealth immigration and anti-discrimination legislation that had been proposed in the United Kingdom.

The ‘rivers of blood’ reference derives from his use of a quote from Virgil’s Aeneid. The Conserva-tive MP said: “As I look ahead, I am filled with foreboding; like the Roman, I seem to see 'the River Tiber foaming with much blood.’”

Powell then referred to America, adding: “That tragic and intractable phenomenon which we watch with horror on the other side of the Atlantic but which there is interwoven with the history and exis-tence of the States itself, is coming upon us here by our own volition and our own neglect.”

In the end, even if EU nationals, immigrants and refugees are permitted to stay in the UK, and Muslims and Mexicans allowed to remain in the US (on or off ‘registers’ which may or may not be introduced) a lot of damage has already been done to society by these two votes.

‘Hate crimes’ are reportedly on the rise and the inevitable outcome of that will be a knee-jerk reac-tion against the kind of anti-discrimination legislation against which Powell raged. Theresa May and Donald Trump will have plenty in common and, doubtless, a lot to talk about when they meet at 1600 Pennsylvania Avenue, Washington DC, sometime in the near future.

In the end, discrimination is one more thing that inevitably leads to a lack of access. It removes a level playing field in many areas of society. Not least in health.

Discrimination of a racial nature aside, Trump has already set about dismantling the Affordable Ca-re Act (or Obamacare) - although he currently has nothing to replace it - which could leave up to 20 million of his poorest countrymen and women without healthcare insurance. That’s another, huge, access issue.

And with regard to access to treatment and medicines, Europe has no reason to gloat, either. The bloc has 500 million potential patients across its current 28 Member States and no-one would at-tempt to say that they all have equal access to the best available healthcare. They quite clearly don’t.

Access for all to the best care possible is a basic tenet of the European Union and there are reasons why all social systems attempt to bring this (and other things) about. Aspects such as wel-fare policies help to build frameworks that allow all members of a nation’s population basic rights and access to basic amenities.

Medicaid, in the US, grew out of this kind of social thinking - as did the NHS in Britain - and ‘Obamacare’ was also an eventual result. Not only has the health of a country been demonstrably linked to the wealth of a country but, also, fair and equitable access to basic needs and rights helps to keep a lid on civil dissatisfaction and, by extension, unrest.

Particularly in the arena of a health, the best possible level of healthcare for all also helps greatly to curb the spread of diseases - it has a highly practical as well as moral basis.

With two momentous votes already behind us, Europe is now looking at a 2017 which will definitely see huge changes - and that’s not even taking into account upcoming elections in France, the Ne-therlands and Germany.

Whatever the results, in whatever country, healthcare must be at the top of the agenda.