Charlie and the Medicine Factory 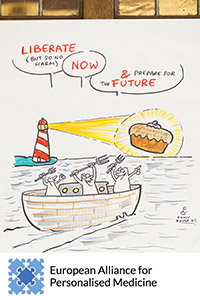 In the famous final speech from the 1940 movie ‘The Great Dictator’, Charlie Chaplin’s character says: “I’m sorry, but I don’t want to be an emperor. That’s not my business. I don’t want to rule or conquer anyone. I should like to help everyone if possible… We all want to help one another. Human beings are like that.”

He continues: “We want to live by each other’s happiness, not by each other’s misery…The way of life can be free and beautiful, but we have lost the way…We think too much and feel too little.”

Then he talks about innovation in terms of its place in the world: “More than machinery, we need humanity. More than cleverness, we need kindness and gentleness…The aeroplane and the radio have brought us closer together. The very nature of these inventions cries out for the goodness in man; cries out for universal brotherhood; for the unity of us all.”

And very close to the climax of the speech, he says: “Let us fight to free the world! To do away with national barriers…Let us fight for a world of reason, a world where science and progress will lead to all men’s happiness.”

So, how far have we come since that movie was made some 77 years ago? Well, science has certainly progressed way beyond ‘the aeroplane and the radio’ in every sphere of life. And in parts of the EU we have even done “away with national barriers” in a very real sense through Schengen.

There are even occasional signs of “universal brotherhood”.

But, to recap: “The way of life can be free and beautiful, but we have lost the way…We think too much and feel too little…More than cleverness, we need kindness and gentleness…More than machinery, we need humanity.”

In this modern-day European Union we have an ageing population of some 500 million citizens. Even when the UK departs at some point down the line there will still be in the region of 435 million. These citizens will live longer on average than ever before, adding greater burdens to already stretched healthcare systems.

Our citizens, their children and their children’s children will suffer from more than one disease at any one time, yet today’s citizens across 28 Member States are already suffering - suffering from healthcare inequality in the face of this generational ticking time bomb.

It’s sad but true that the availability of treatments and new medicines varies hugely from nation to nation across the EU, regardless of the fantastic science behind new genetic-based developments, such as personalised medicine, which aims to give the right treatment to the right patient at the right time, in a highly targeted manner, while also having huge potential for disease prevention.

But progress in general healthcare terms is not quick enough.

Aside from the fact that each Member State has competence for it own healthcare system, so that there is often disunity and replication, what often gets in the way of the “kindness and gentleness” and the “humanity” that could work alongside the “cleverness” and the “machinery” is a lack of cooperation, a lack of coordination, silo thinking and out-of-date regulations and processes that are no longer fit-for-purpose in the 21st century.

There is certainly no shortage of “kindness and gentleness” in the health arena, but has science and progress actually led to “all men’s happiness” and “the unity of us all”?

Perhaps what we need is some strong leadership. Not in the satirical way of ‘The Great Dictator’ - despite the rousing finale - but in reality, in the here and in the now.

Our political leaders need to grasp the fact that it is not only a pension cliff that we are teetering on the edge of, but a healthcare cliff over which bucketloads of cash are falling daily, much of it wasted.

All stakeholders, including policymakers, lawmakers, scientists, academics, industry representatives, healthcare professionals, the media and, of course, patients, need to work hard together to reach consensus and find better and fairer ways of using all of the new technologies around us - whether it be Big Data, new IVDs, breakthroughs in genetics, speedier ‘bench-to-bedside’ novel medicines, and clinical trials that take into account rare disease sub-groups.

The future is already with us. So let’s look to ourselves and our leaders to build “a world where science and progress will lead to all men’s happiness”.